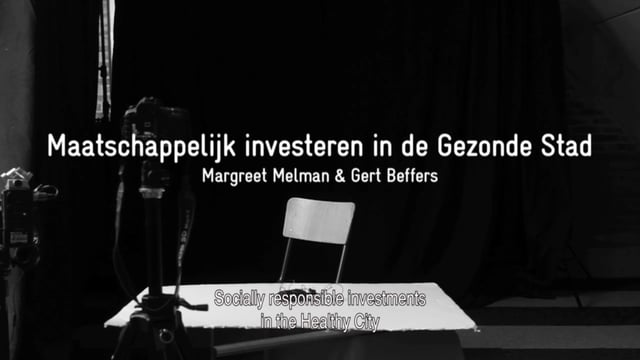 Socially Responsible Investment Strategies for the Healthy City is one of three videos in which IABR–Atelier Utrecht has interviewed local stakeholders on the Healthy City.

In this video Magreet Melman (project manager at Care & Culture) and Gert Beffers (social broker at Wijk&Co) talk about their experiences with healthy city making. Both set up cultural projects to involve the participation of inhabitants in the development of projects on the neighborhood level, stimulating the interaction between different groups of people. When needed, they support local initiatives by presenting them to a larger audience and potential investors.

IABR–Atelier Utrecht
The population of Utrecht is among the healthiest in the Netherlands. There are, however, marked differences inside the city. Utrecht is doing its best to address such persistent differences in health and life expectancy, but has to operate in a force field that is in full transition. The national government is delegating care tasks to municipalities. The consolidating health economy is passing into the hands of a few large parties that add little local value. To examine how health and urban development issues can be coupled, the IABR–Atelier Utrecht: The Healthy City investigated what innovative spatial development strategies can contribute to the creation of an inclusive, healthy city that prioritizes solidarity between different generations, cultures, and income groups. Atelier Utrecht focused on both spatial and programmatic transformations in the city as related to health and well-being, and on changes in the funding of health care. Atelier Utrecht: The Healthy City provides insights that can also inspire other cities in the Netherlands and abroad.