Atelier Dordrecht is wrapping up

This year marks the 600th anniversary of Dordrecht being hit by perhaps the greatest water disaster in Dutch history: the St. Elizabeth’s Flood of 1421. It turned the city into an island, which it still is to this day, making it very vulnerable to flooding. Water safety therefore has the highest possible priority. In the IABR–Atelier Dordrecht, with Adriaan Geuze as lead designer, the IABR and the municipality of Dordrecht are exploring how water safety can be used as a lever for sustainable area development. The IABR–Atelier shows that De Staart, now an area with many problems and few prospects, can play an unexpectedly important role in realizing the Dordrecht water safety agenda if sustainable and inclusive urban development of new living-working environments is set in motion there.
The first results of the study were immediately and enthusiastically received by both the Safety Region and the City Council of Dordrecht. The final results will be presented in the Biesboschhal in De Staart: THE HIGH GROUND, an IABR–exhibition as part of the major St. Elizabeth’s Flood commemoration in Dordrecht, open to the public from July 3 through the end of August.

Flexible City
The water-safety-as-a-leverage approach requires there to be flexible space in De Staart at all times, so that the extra square meters needed for peak water capture during a disaster can quickly be realized. By including the space needed to accommodate evacuees and other emergency facilities in the design process, an urban environment can be developed in which people not only live, but where there’s also ample space for recreation, education, and other public facilities. West 8’s system analysis reveals the contours of what is possible on De Staart: an inclusive and sustainable city, with functions and facilities close to where people live. 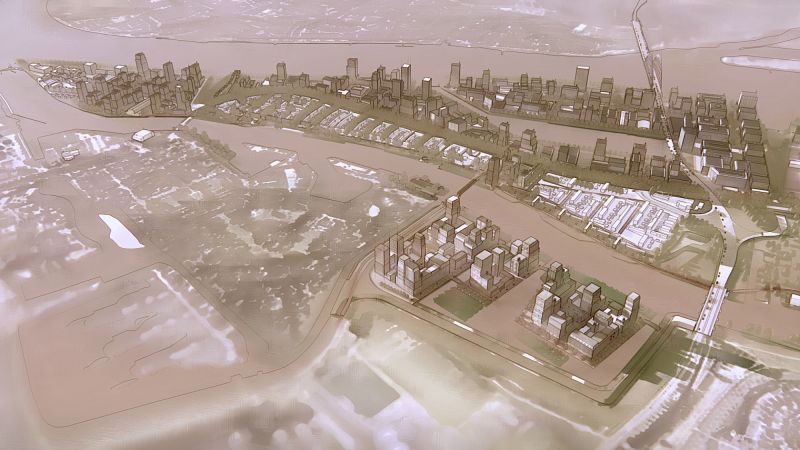 Choosing to Connect
The water-safety-as-a-lever approach also emphasizes the need for good connections, because De Staart must always be easily accessible to evacuees. The IABR–Atelier therefore argues for three new bridges over the Wantij, which would increase accessibility to De Staart for slow traffic and break it out of its current isolation. VenhoevenCS investigated what this would mean for the daily mobility system and designed a new, very recognizable route that better connects De Staart with the rest of Dordrecht and, in case of a disaster, can function as a safe and familiar escape route. In the event of a calamity, new facilities along this route (such as a theater or a mobility hub) function as the first shelter for evacuees, while, on a daily basis, they serve as a connecting element in the urban fabric. 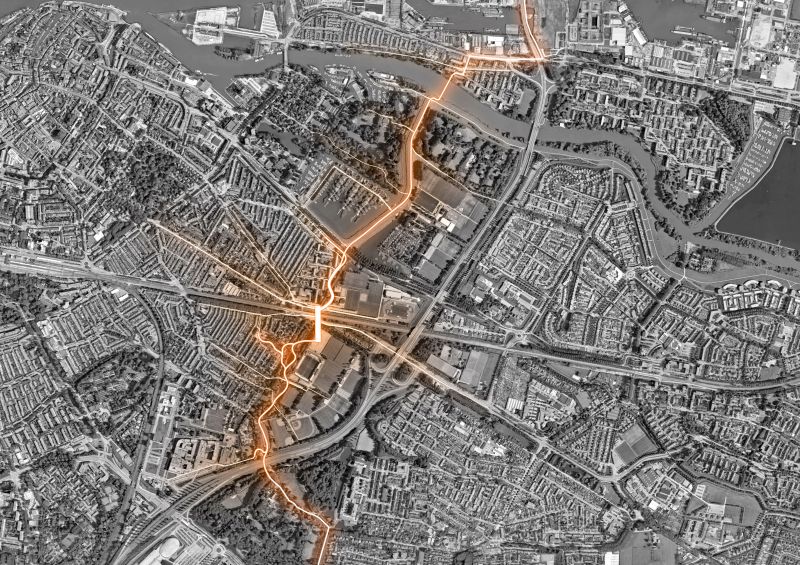 Increasing Potential
Choosing to connect goes beyond the urban area of Dordrecht. West 8 designed a new recreational (cycling) route, from the center of Dordrecht across De Staart to Gorinchem, which connects various locations in the region. This increase in scale causes what are now local places to acquire an urban significance. For example, a community center becomes a pavilion with a beach that attracts people from all over the region. Moreover, thanks to the water-safety-as-a-lever approach, all these small-scale places for recreation acquire a second function: during an evacuation, for example, they can be used as central distribution points that many people know how to find easily. The Atelier’s leverage approach ensures an increase in the attractiveness and potential of such places.

Outdoor Space as a Starting Point
True to IABR's mission, the IABR–Atelier carried out a system analysis based on the Sustainable Development Goals (SDGs), which demonstrated that the development of outdoor space should be a guiding principle in the design process. 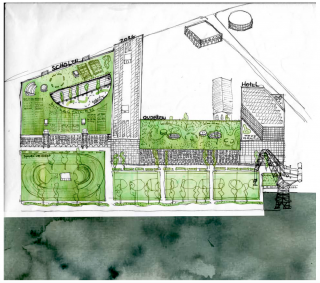 The research by Studio Donna van Milligen Bielke (DMVB) shows that outdoor spaces are becoming even more important in the water-safety-as-a-lever approach because they will play a double role. In daily use they function as accommodations with specific qualities, but in case of flooding they can easily be transformed into infrastructure for evacuation. Designing a high-density, multifunctional city with water safety and the SDGs at the heart of the program of requirements therefore starts with designing the outdoor space.
Separate from the IABR–Atelier, but inspired by its approach, students of Eindhoven University of Technology investigated all kinds of variants and their outcomes. 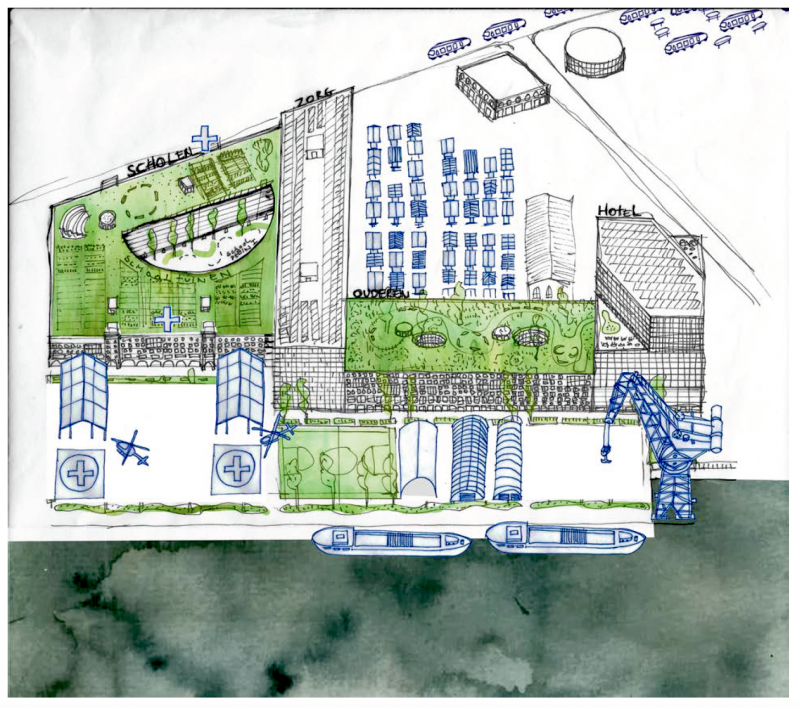 Flexible Building
The IABR–Atelier makes an analysis at the city and neighborhood level, but also conducts research at the level of the building. If De Staart is to become a city with high density and many additional functions, and serve as a temporary refuge in case of an emergency, a flexible building typology is required. EGM architects designed a multifunctional building that can be produced cheaply and quickly. It has a modular structure that consists of a standard unit that can be divided and combined in different ways. The result is an affordable and sustainable building with a multifunctional base, ideal for start-up companies because rents can remain low – a rich and diverse live/work complex that can also accommodate a large number of evacuees in times of crisis. 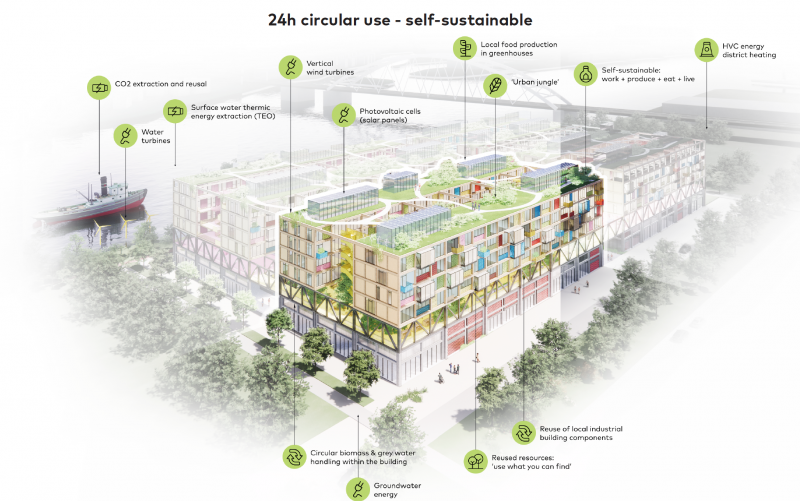 Living on the Water
If a lot of people have to be temporarily accommodated in De Staart during a disaster, ensuring that there is always sufficient clean drinking water is an important issue. Halving the present, partially contaminated De Grote Rug Reservoir will result in higher water quality in the future. This will make a large expanse of water available for development of both nature and housing. Design office PosadMaxwan conducted research into how to realize high-density living on the water here, with an emphasis on the quality of the outdoor space and the relationship with the water. This resulted in a realistic and rich variety of outdoor space typologies that would result in a diverse city on the water. 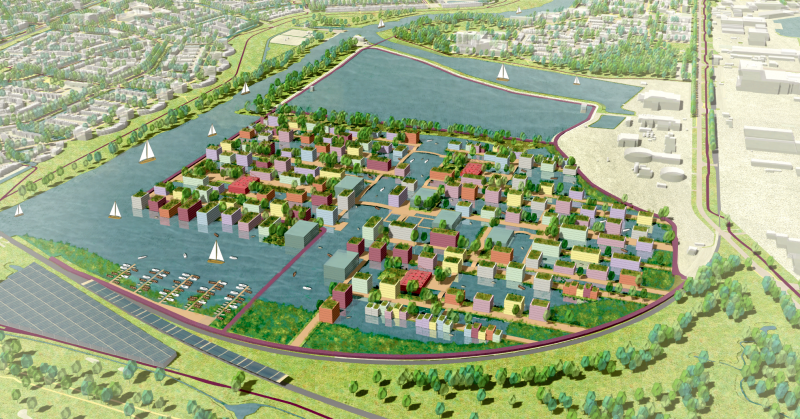