The North Sea and energy transition 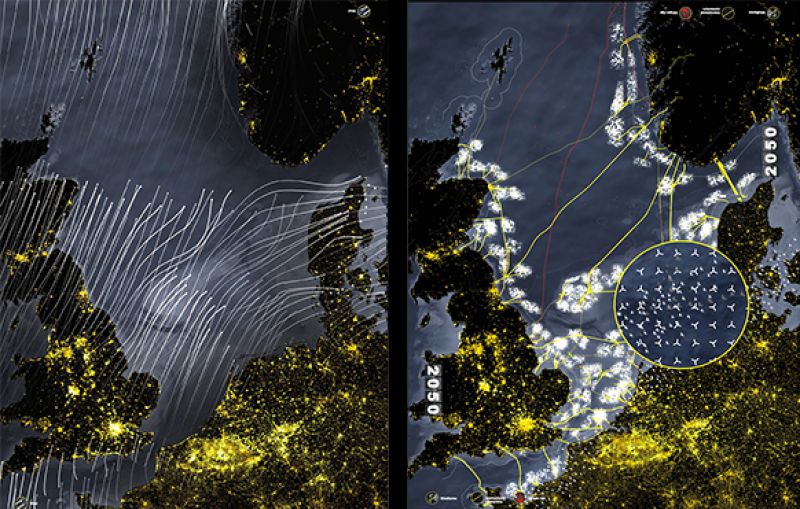 The European climate objective – 80 to 95 percent reduction of greenhouse gas emissions in 2050 compared with 1990 – requires significant system changes. The IABR–Atelier 2050 – An Energetic Odyssey shows how far-reaching the energy transition from fossil fuels such as oil, coal, and gas to an energy supply largely fed by renewable energy sources actually is. It is a (spatial) task that is still largely underestimated. On land, we will have to pull out all the stops in terms of energy saving, central and decentral initiatives with solar panels, wind, bio mass, geothermal heat, residual heat, and so on. Even making a maximum effort, this will prove inadequate. 2050 – An Energetic Odyssey represents a system leap that makes it possible to bridge this gap by the very large-scale production of wind energy on the relatively shallow North Sea for the countries that surround it.

Transition
The IABR–Atelier 2050 demonstrates what such an ambitious approach involves, what infrastructure it requires, what it means to link up with the nature of the North Sea, what role the entrepreneurial state plays, which innovations this requires, and especially which new economic dynamic this will generate, for instance in the offshore sector.
Research by design will facilitate this transition of imaginaries. The aim of the installation is to create a reference point for a broad dialogue between public and private parties and a new, appealing step towards the realization of large scale production, transportation, and storage of renewable energy on and around the North Sea. Development perspectives are outlined on the basis of a robust future scenario.

After IABR–2016–THE NEXT ECONOMY the installation has been reformatted. Click here to see the video

Towards a clean economy
The title of the project, 2050 – An Energetic Odyssey, is meant to provoke. Many people underestimate the scale of the challenge and think that the transition can take place with the support of small-scale projects alone (small is beautiful). However, the goal agreed upon worldwide – to limit global warming to 1.5 to 2 degrees – also requires more large-scale and drastic changes of the system. The good news is that, in principle, the production of North Sea energy can meet the demand. 2050 – An Energetic Odyssey shows that the Next Economy can be a clean economy.

2050–An Energetic Odyssey: the video 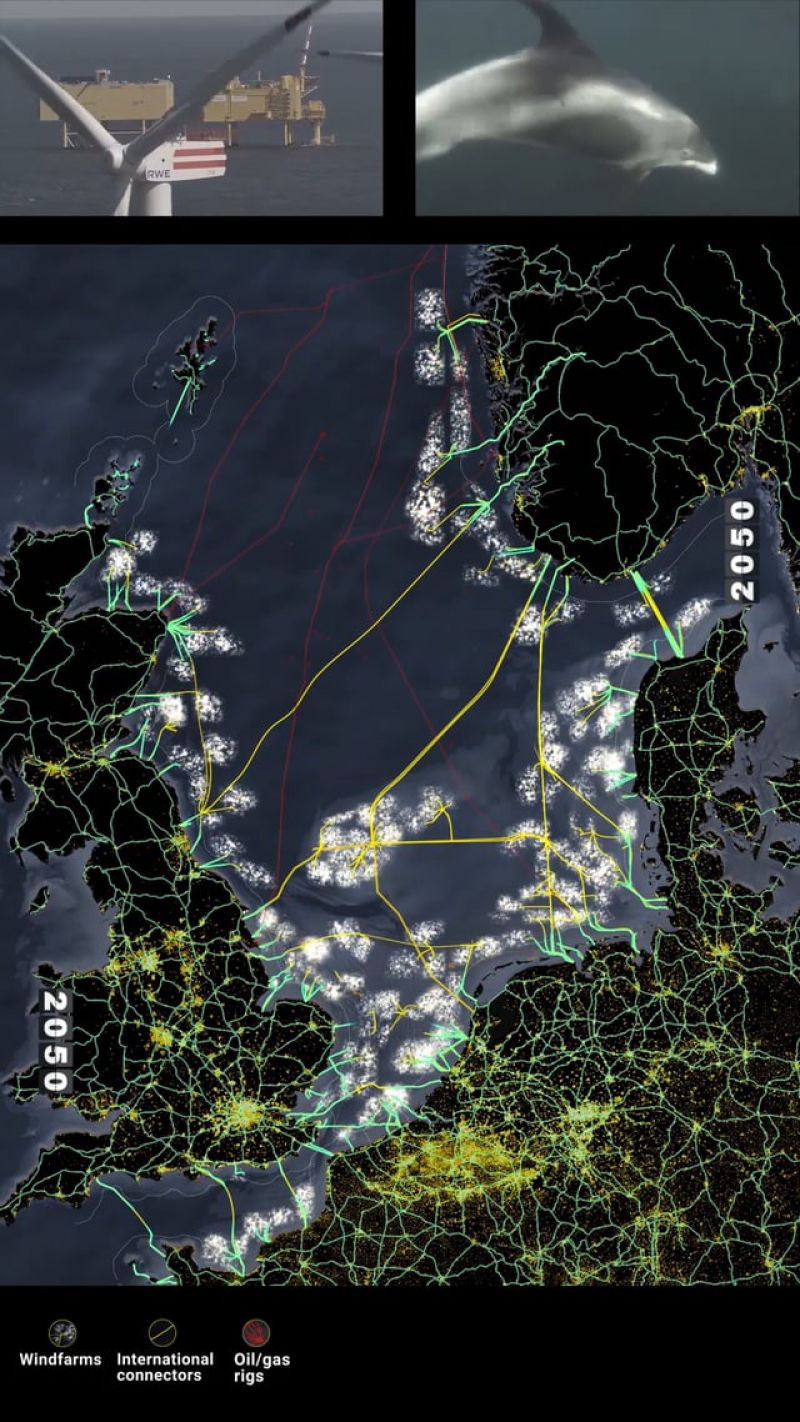 This is the on line version of the large-scale animation 2050 – An Energetic Odyssey, one of the highlights of IABR–2016–THE NEXT ECONOMY.

When you watch this computer animation formatted for smartphone on your laptop or computer, press 'play' (middle of screen) and then press 'enter full screen' (bottom right corner of screen).
You can also switch to our Vimeo channel to watch the video in full screen mode. Click here

2050–An Energetic Odyssey
2050 – An Energetic Odyssey is an installation comprising a 12-minute animation that provides answers to the seemingly simple question: ‘If we take the two-degree climate target seriously, what should we do?’
The Odyssey focuses on the North Sea. The highlight of the plan are 25,000 10MW wind turbines that will be able to meet about 90 percent of the energy demand of the North Sea countries by 2050.
The animation is a meticulous visualization of a possible future: step by step, it takes the audience to 2050, explains what has to be done and what the underlying considerations are, addresses energy saving and decentralized energy production and describes the impact on employment and on the ecology of the North Sea. The logistics of this mega operation are extensively discussed as well.

The collaborative production process, the presentations of interim results and the exhibition and debate during IABR–2016 have forged a consortium of actors in which offshore builders, a wind turbine manufacturer, ports and power companies, several Ministries, nature NGOs, marine ecologists, and designers have jointly reached the conclusion that yes, it can be done.
In the context of the Dutch EU Presidency, the Directors-General for Energy and subsequently the informal council of EU countries’ Energy Ministers have previewed the Odyssey. The Ministers not only watched the installation, but were also inspired: the press release following the regional partnership agreement of the North Sea countries that was established during the Dutch presidency states that ‘it helped that we could show our colleagues how the operation would work’. 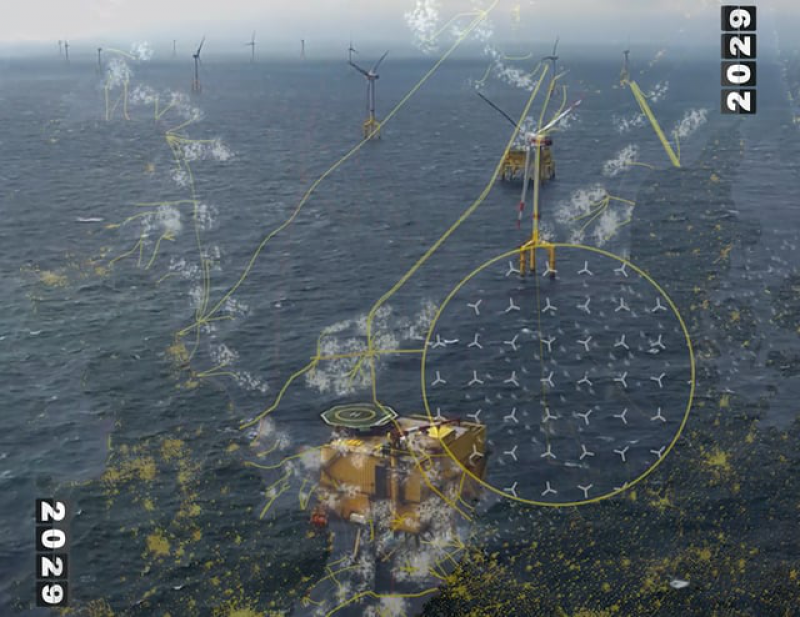 2050–An Energetic Odyssey, the trailer

The installation 2050 – An Energetic Odyssey was one of the highlights of IABR–2016.

Now that the Biennale in Rotterdam is over, many parties have expressed interest in presenting the installation elsewhere and to initiate further debate: Lessons learned, and now what are the next steps?

That is why 2050 has been reformatted for presentations elsewhere - see the PDF at the bottom of this page.
Interested parties in the Netherlands may contact H+N+S Landscape Architects at info@hnsland.nl. For exhibitions and presentations outside the Netherlands, please contact the IABR at 2050@iabr.nl 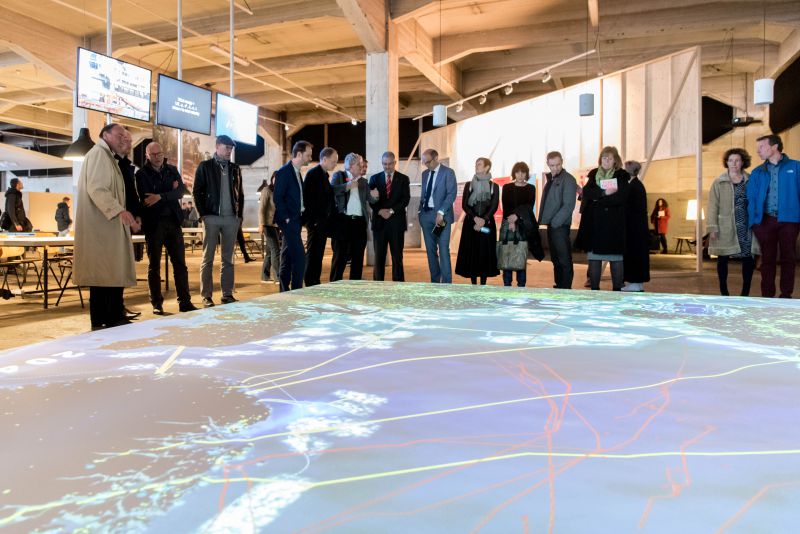