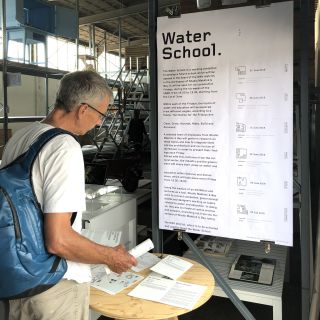 Make
The Making Day investigates the “joy of making”, and how this can be reintroduced within schools, starting from the workshop. It questions whether a school can be autarkic, not only in its food, water- and energy consumption, but also in the production of its elements. Can a school’s workshop produce all that is needed for a school to function, ranging from bricks to desks to books?

Invited lecturer Jasper Brommet is one of the partners of Stone Cycling, a company transforming raw waste material into new building bricks. Currently, Stone Cycling is collaborating closely with architects and designers, as they are constructing new buildings using their bricks.

The second invited lecturer, being Tjeerd Veenhoven, is a designer who does not merely design products and materials, but also value chains, from raw material all the way up to product and user experience. Currently, three of the products he has developed have evolved into independent, sustainable businesses, ranging from leather made of palm leafs, to pigments made of tulips as well as textiles made from algae.

Invited artist Lucas Muñoz is a Spanish designer, artist and craft traveler based between the Netherlands and Spain. Crafting pieces that take a personal look at our artificial environment, Lucas uses tools such as humour and rawness to create his body of work. During the “Making Day” he will show his “Napalm Boat”.

location: Studio Makkink & Bey, Marconistraat 85, Rotterdam
date: June 22
the exhibition is open from 2 until 7 pm, the lectures and discussions are scheduled between 4 and 6 pm
language: English