The Los Angeles Biennale (LAB) is an experiment in creating a nomadic platform on urbanism and architecture in LA, hosted by other urbanist biennales around the world. Its second installment takes place in Rotterdam, is hosted by IABR and ZUS, and will take place on Friday 13 and Saturday 14 June, on the Luchtsingel in the Schieblock Rotterdam.

This time around, LAB will shine the light on a local municipality in Los Angeles County, Vernon City. Known for being “Exclusively Industrial” since its establishment in 1900’s, Vernon City has been home to countless factories involved in food production, storage and distribution.
“The Vernon City Project” has also been a selected entry for IABR–2014–’s main exhibition URBAN BY NATURE– in the Kunsthal Rotterdam.

Discussions will start from the possible forms of urbanism and the critical co-existence with industrial production in the urban core. In Los Angeles, this co-operative condition not only has a strong economic impact on the employment of the labor force but it is also seen as a catalyst to mitigate and counter the sprawl of the city. This also triggers questions on varied conditions of suburbia, sustainability and good city design practices.
What will happen to the city cores as they increasingly become management / middlemen / administrative centers filled with real estate speculation and retail based local economy, often capitalized by global brand name corporations?
What happens to vulnerable communities within the city that are subjected to the fetishisms of the marketing concept “The Future Is Our Product” and all its uncertainties?
Lastly, how should the built environment and involved parties respond to these complex and interconnected issues dealing with the contemporary evolution of nature and urban life? 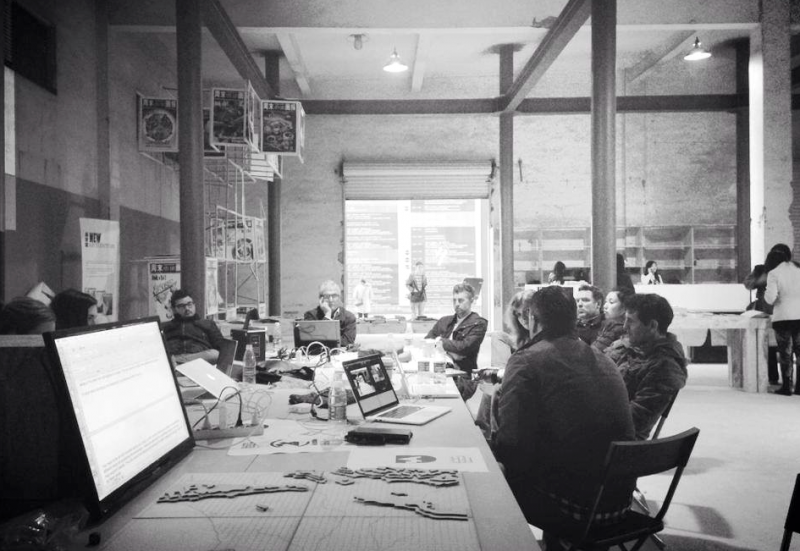 The Nomadic Los Angeles Biennale of Architecture and Urbanism first manifested it self at the Architecture Biennale of Shenzhen, in China - for the catalogue, click here.
IABR–2014–PROGRAM: conferences, lectures, debates and events