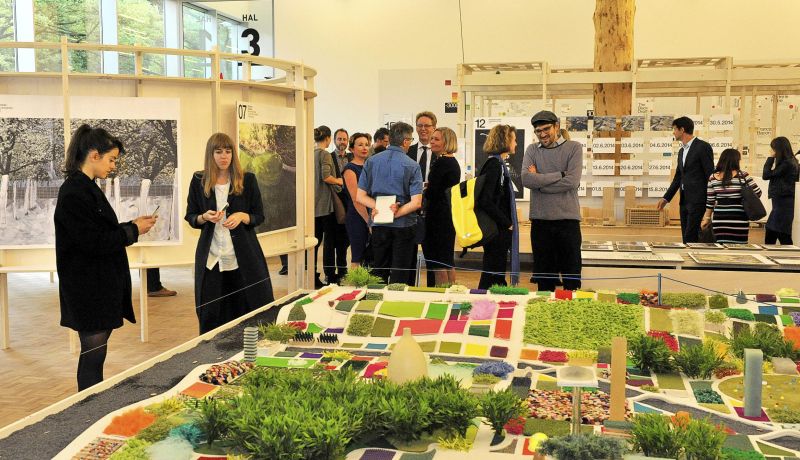 IABR–2014–URBAN BY NATURE–, the sixth edition of the International Architecture Biennale Rotterdam, was open from 29 May until 24 August 2014.
The Dutch landscape architect Dirk Sijmons was the curator, and the theme was Urban by Nature.

The main exhibition was presented in the Kunsthal and the Museum of Natural History in Rotterdam.

An extensive program of lectures, conferences and debate, events and excursions, started on 29 May, and other activities took place elsewhere in Rotterdam. Click here to see the complete agenda.
All films and video registrations made for URBAN BY NATURE– are available on this website and on the IABR–2014– vimeo channel. 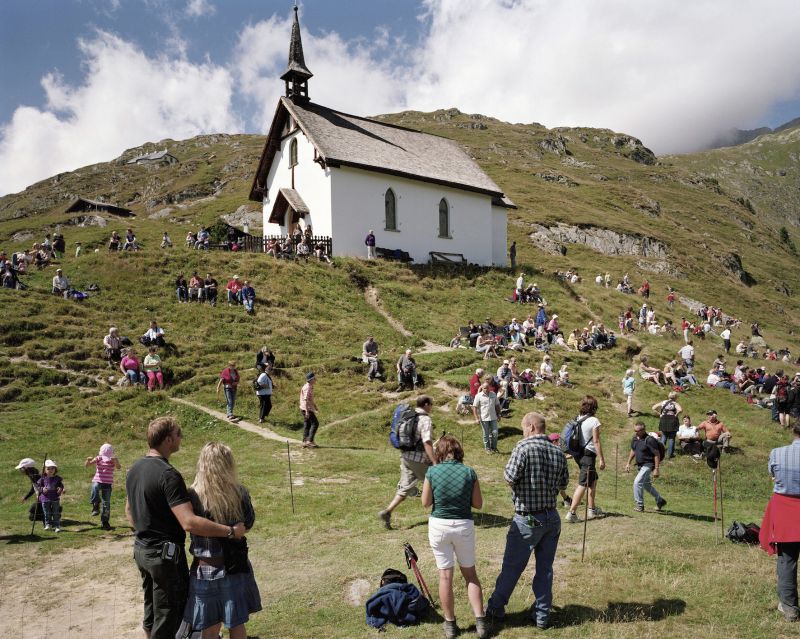 IABR–2014–URBAN BY NATURE– claims that we can only solve the world’s environmental problems if we solve the problems of the city.

Looking through the lens of landscape architecture, IABR–2014– redefines the way we deal with urban challenges by analyzing the relationship between urban society and nature, and between city and landscape.
This edition of the biennale argues that cities are an integral part of huge urban landscapes, complex systems that have become our natural environment. This perspective has many implications for the way we plan and design our urban environment. Perceiving it as an organism opens up possibilities to develop spatial interventions that make use of its metabolism.
With the use of new and innovative design strategies that effectively address the city as the bigger urban landscape that it is, we can make the city more resilient and thus truly contribute to a more sustainable future world.

Six exhibitions, 96 projects
URBAN BY NATURE– addresses these issues showcasing 96 projects in six separate exhibitions: five at the Kunsthal and one at the Natural History Museum Rotterdam.

A PLANET CULTIVATED
The (re)organization of the urban landscape requires a committed relationship between man and nature. There are many manifestations of that commitment, from gardens and parks to nature conservation and 'building with nature'.
→

PURE RESILIENCE
The Natural History Museum hosts an exhibition on urban ecology that reflects the rich diversity of urban nature. The city is a biotope, too.
→

EXPLORING THE UNDERGROUND
Discovering, reassessing, and planning the unknown world beneath our feet. The underground is the source of natural resources, provides storage space and is the archive of humanity’s cultural history and of the earth itself.
→

THE URBAN METABOLISM
Most global environmental problems are due to the malfunctioning of the urban metabolism. If we want to solve problems worldwide, we will have to address those of our cities, first.
→

URBAN LANDSCAPE AND CLIMATE CHANGE
The world’s largest urban landscapes are located along coasts and in deltas. These areas are the most vulnerable to the effects of rising sea levels. Plans for water safety go hand in hand with area development.
→

STRATEGIES FOR THE URBAN LANDSCAPE
Urbanization is becoming a landscape architectural challenge; urban planning difficulties are arising in the countryside. Is it possible to plan on the scale of the urban landscape?
→ 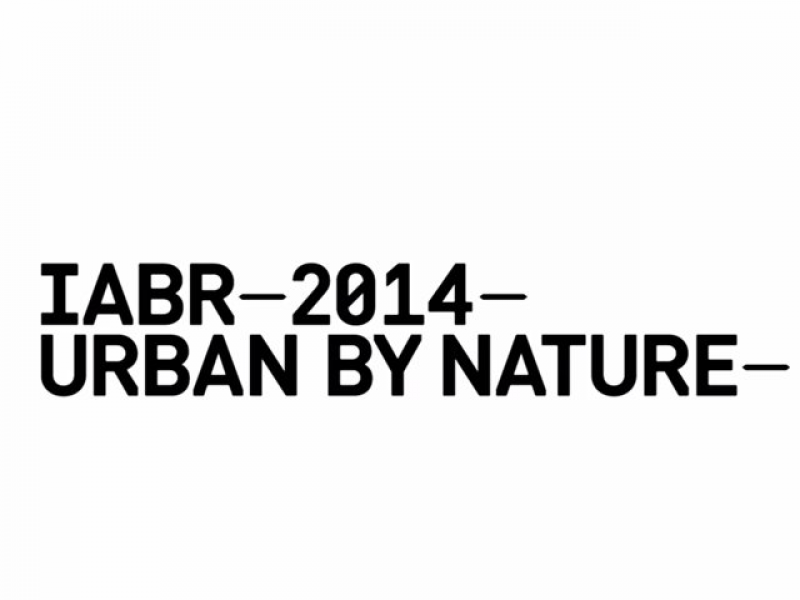 URBAN BY NATURE–: 96 PROJECTS
More on The exhibition ▸▸▸ 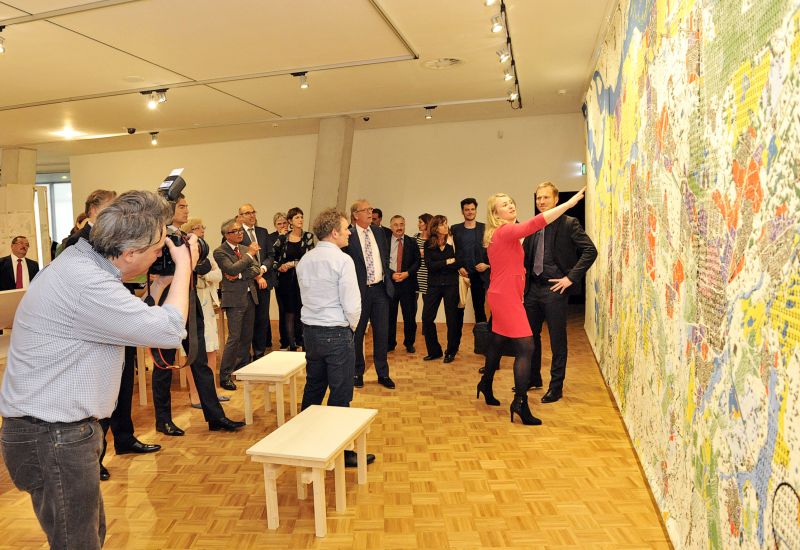 The mainstay of the research and development trajectory of IABR–2014–URBAN BY NATURE– are the three IABR–Project Ateliers that the IABR has set up in collaboration with the municipalities of Texel and Rotterdam and with the province of North Brabant (in collaboration with the municipalities of Eindhoven, Tilburg, Breda, Helmond en 's Hertogenbosch, and with Brabant's water boards , in direct response to concrete and existing spatial challenges. 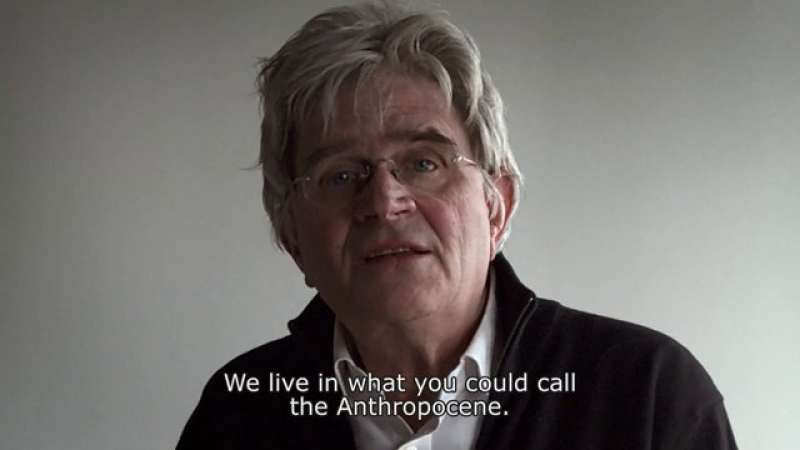 Dirk Sijmons, curator of IABR–2014–URBAN BY NATURE: "If we want to address the real and oppressive issues of the urban planet of the twenty-first century, a moralistic message that amounts to saying that we humans have gone too far and therefore have to reverse course is of little use. There is no going back. Welcome to the Anthropocene!"

This film is one of a series of short videos commissioned by the IABR for its sixth edition, IABR–2014–URBAN BY NATURE.
director: Alexander Oey
producer: George Brugmans

From the opening weekend of the IABR–2014– to early July, the IABR and its partners hosted an extensive program of lectures, debates, conferences, presentations, events and field trips.

It started of right away, on 29 May, when the exhibition URBAN BY NATURE– opened to the public, and when a comprehensive OPENING DAY PROGRAM was presented in the Kunsthal.

For the complete program of conferences, lectures, debates, field trips and events, please check the AGENDA. 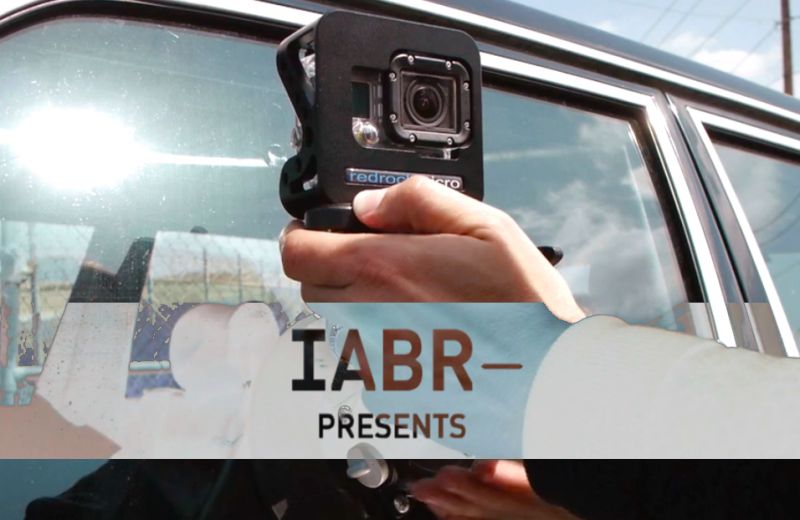 You can also follow us on Vimeo: IABR–2014–FILM Channel

The IABR–2014–FILMS– were produced by iabr/UP and commissioned by IABR for the sixth edition of the International Architecture Biennale Rotterdam, URBAN BY NATURE 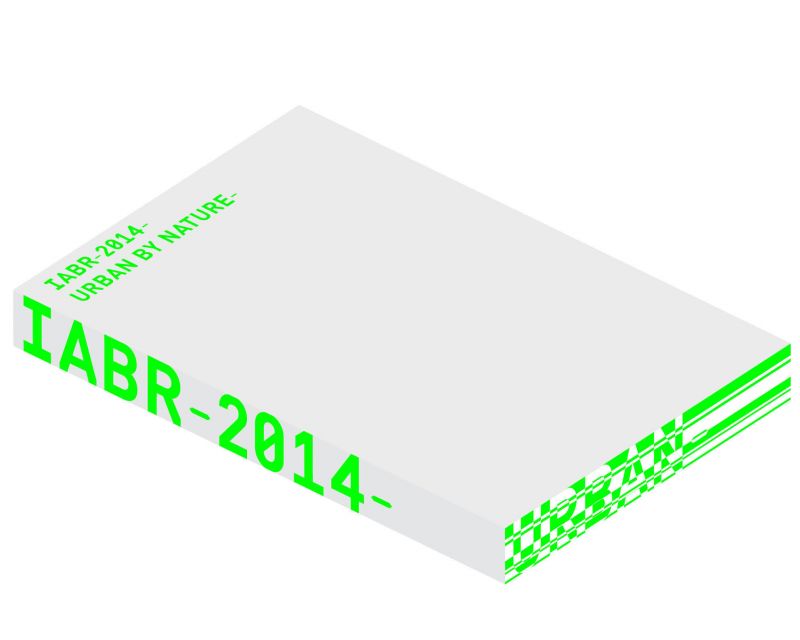 The CATALOG of IABR−2014−URBAN BY NATURE− can be ordered directly from IABR. The price is € 19,50 plus postage. Click here →

The catalog of the 6th edition of the International Architecture Biennale Rotterdam contains a detailed description of the exhibition URBAN BY NATURE– and of all of the projects that are part of it.
Dirk Sijmons contributes an introduction to the theme and introduces the different sections of the exhibition. The work process and results of the three IABR–Project Ateliers are highlighted. Other contributions are by Ahmed Aboutaleb, Yves de Boer, George Brugmans, Johan van de Gronden, Maarten Hajer, Eric Hercules, Henk Ovink, Jelle Reumer, Piet Vollaard and Charles Waldheim. 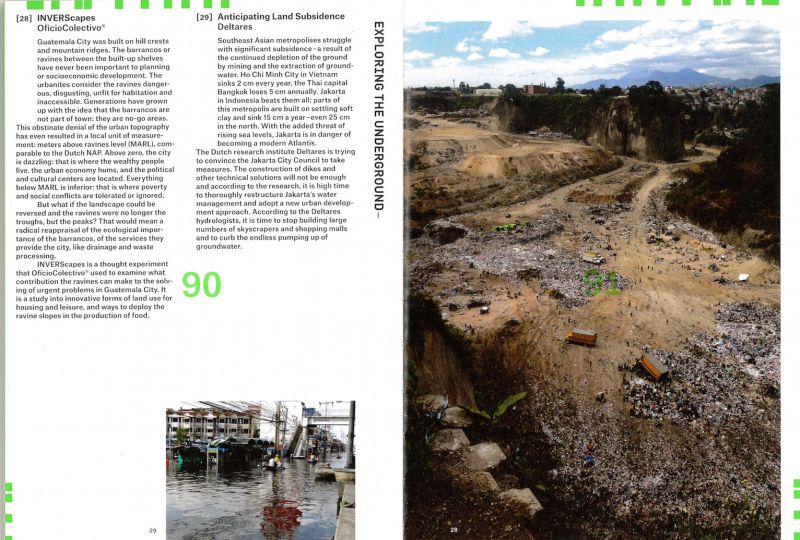 URBAN BY NATURE–
Edited by George Brugmans and Jolanda Strien

The Catalog was designed by LUST, and is internationally distributed by Idea Books → 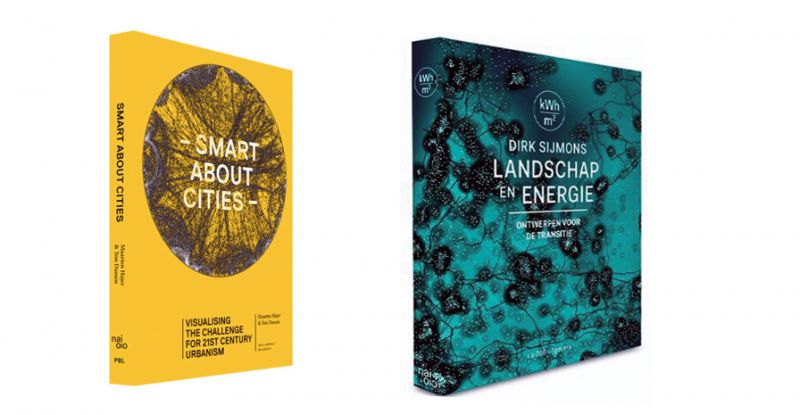 In the context of IABR–2014–URBAN BY NATURE– several books have been published.

The series of infographics of nine material flows (water, energy, biota, air, food, waste, people, cargo and sediments) that CatalogTree designed for the exhibition URBAN BY NATURE–, are based on extensive research and data collection by PBL Netherlands Environmental Assessment Agency.
PBL's Maarten Hajer and Ton Dassen subsequently wrote Smart about Cities, Visualizing the Challenge for 21st Century Urbanism, a strong argument for a ‘smart urbanism’ instead of an uncritical adoption of ‘smart cities’.
This book can be ordered on line at NAI Booksellers: click here →

The book Landscape and Energy, Designing Transition, by IABR–2014–Curator Dirk Sijmons and others, is about designing for the post fossil-fuel landscape - from the solar panel on the roof to the scale of global politics.
Landscape and Energy was the starting point for the project KwH/M2 by H+N+S Landscape Architects, on show at URBAN BY NATURE–.
This book too can be ordered on line at NAI Booksellers: click here → 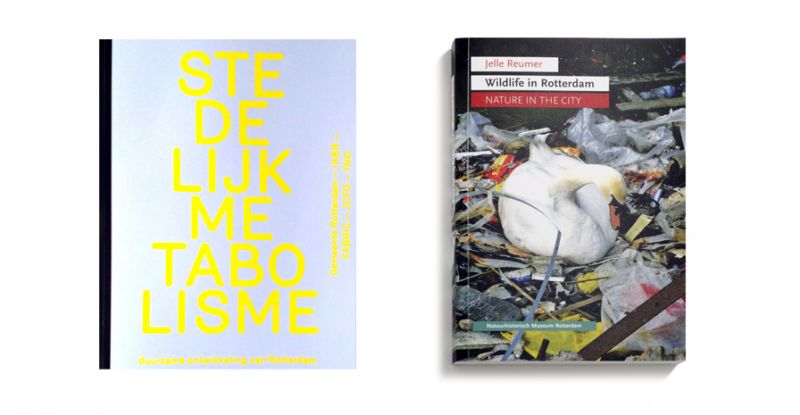 The Municipality of Rotterdam, IABR, .FABRIC, JCFO and TNO published Urban Metabolism, Sustainable Development of Rotterdam. This book maps the results of the IABR–PROJECT ATELIER ROTTERDAM and explores how these these might become cornerstones for sustainable development policies for the city of Rotterdam. The PDF can be downloaded at the bottom of this page.

Jelle Reumer, the curator of the IABR–2014– PURE RESILIENCE, wrote Wildlife in Rotterdam, Nature in the City, a small history of urban ecology and an ode to the resilience of nature.
This book too is available from NAi Booksellers: click here → 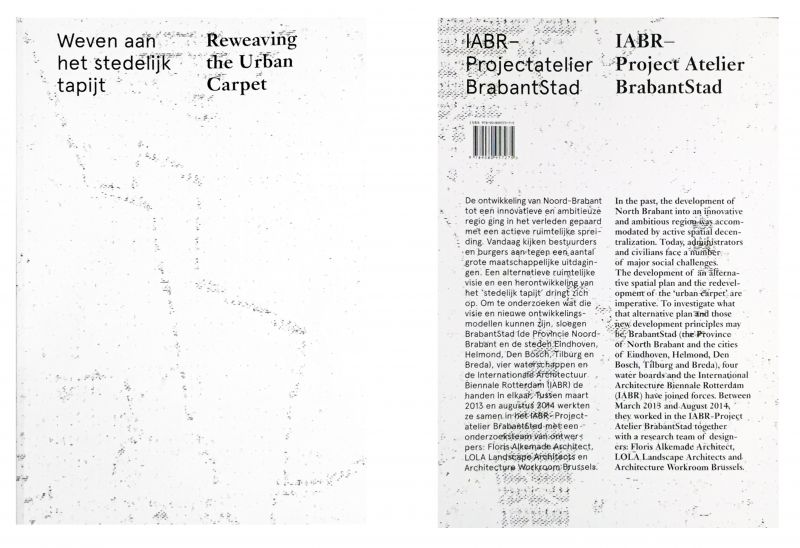 In November we published Reweaving the Urban Carpet, documenting the challenges, work process and results of the IABR–Project Atelier BrabantStad; a research by design trajectory exploring new spatial development models for the province of North-Brabant, and for which the Province and IABR teamed up with the cities of Eindhoven, Helmond, Tilburg, Breda and 's-Hertogenbosch, and with the Brabant Waterboards. The design offices were Floris Alkemade Architect, LOLA Landscape Architects and Architecture Workroom Brussels. This publication is available from the IABR for € 7,50 (within the Netherlands) or € 12,50 (outside the Netherlands). For more information, click here → 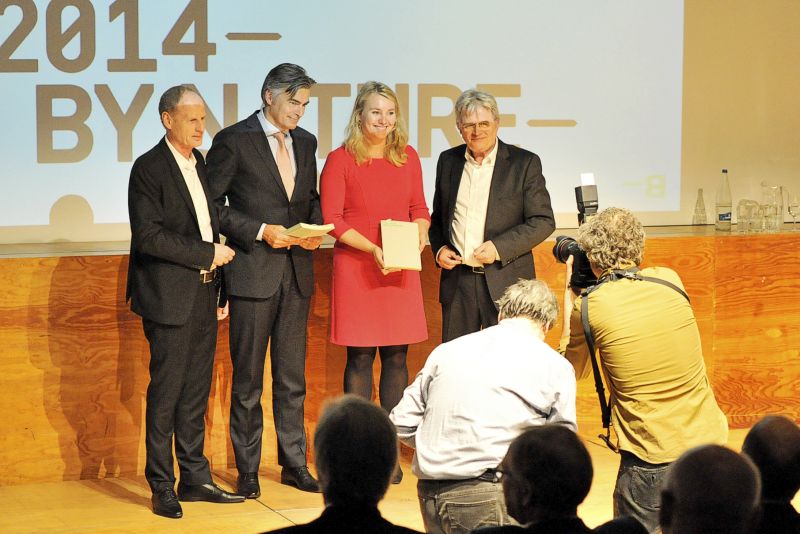 On 28 May, Melanie Schultz van Haegen, minister of Infrastructure and the Environment, en Milieu, opened the sixth edition of the International Architecture Biennale Rotterdam, IABR–2014–URBAN BY NATURE.

The opening ceremony was moderated by Henk Ovink, advisor to the American government and one of the curators of the last biennale, Making City.
The guests were welcome by Ed Nijpels, chair of the Supervisory Board of the IABR, and a former Minister of Spatial Planning and the Environment.

THE NEED FOR RESEARCH BY DESIGN
In her opening speech the Minister, Melanie Schultz van Haegen, urged everyone to seriously explore the future of our cities. New technologies, the transfer of responsibilities to regional and local governments, water and also nature are important issues on which to focus. "How can we combine urban development and the dynamics of nature in the coming decades? This is one of the most important questions the world faces right now."
The Minister stressed the IABR's role as a research biennale: "We cannot know the future of our cities in detail but we can still explore it. The Biennale helps us to discover and to see the future a little more clearly. So I urge you all to make good use of it and design answers to the questions of today and tomorrow."

Executive director George Brugmans asserted that it is IABR's mission to promote the research by design methodology: "The role we claim is that of a free and open cultural space that brings together designers and all stakeholders for a detour that acts as an alternative route to the future; a free and open space that acts as an incubator for innovation. This makes the IABR first of all an ongoing research by design program. A submarine that comes up for air every two years – and now is the moment again– to present the outcomes of the ateliers and build a public argument around these, with exhibitions, films, conferences, and whatever we think of."

Adriaan Visser, vice-mayor of Rotterdam, underlined the biennale's importance for the city. "The International Architecture Biennale Rotterdam has become a genuine Rotterdam tradition. It has proven to be an innovative platform to outline new perspectives and opportunities for our city."
In his speech, Visser focused on the results of the IABR–Project Atelier Rotterdam, a comprehensive research by design trajectory in which city and biennale closely collaborated: "The knowledge resulting from the Project Ateliers contribute to a strong, attractive and resilient city. A city that will inspire other cities worldwide."

VIDEO MESSAGE FROM WASHINGTON DC
The American Secretary of Housing and Urban Development, Shaun Donovan, who was going to attend the opening, had to cancel but spoke to the guests in a specially recorded video message.

IABR–2014–CURATOR STATEMENT
The ceremony was concluded by the curator, Dirk Sijmons: "Not only the boundary between the city and the countryside is blurring but also the boundary between nature and society. The fascinating aspect of our time is the hybridizing of the biosphere with the techno-sphere at large. Hence the observation that the urban landscapes forms our habitat, ecology and our nature. We are a social species with a propensity to cluster together and to build cities: we are Urban by Nature. This positive angle on urbanization as a highly successful model of spatial organization does not eclipse the observation that most global environmental problems have urban roots. If we want to solve these problems we have to solve our urban problems."

After the opening 800 guests from all over the world previewed the exhibition URBAN BY NATURE– in the Kunsthal and in the Natural History Museum Rotterdam.

On 29 May the biennale opens its doors to the general public.

City of Rotterdam
Municipality of Texel
BrabantStad (the Province of North Brabant and the municipalities of Den Bosch, Eindhoven, Tilburg, Breda, and Helmond) in collaboration with the North Brabant Water Boards
Municipality of Beykoz / Istanbul and the Riva Tourism Development and Investors Association

WITH THE SUPPORT OF

The sixth edition of the International Architecture Biennale Rotterdam, IABR–2014–URBAN BY NATURE–, called for best practices from all over the world to support and substantiate the Biennale’s main exhibition’s narrative. Over 500 prospective participants responded to the IABR–2014–Call for Projects– and submitted their applications.