DOWN TO EARTH: Curator Introduction 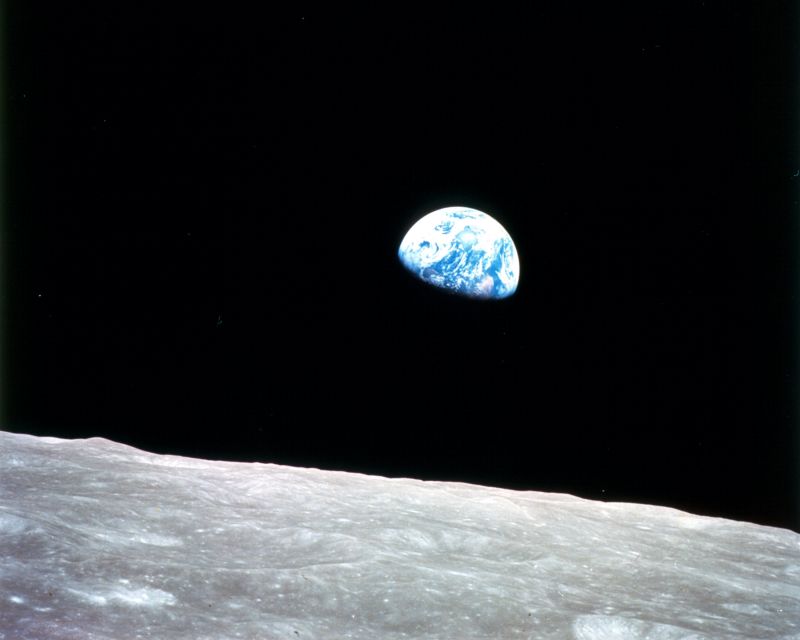 EARTHRISE
On Christmas Eve 1968, as mankind first orbited the moon while millions of people watched it happen, astronaut Bill Anders took a special picture. To allow NASA to investigate possible locations for lunar landings, he was shooting images of the lunar surface. As Apollo 8 circled the moon for the first time, the astronauts suddenly saw the Earth ‘rising’. Anders didn’t hesitate and captured the view. It would turn out to be one of the most influential photographs of all time, later named Earthrise.

Against the pitch-black backdrop of an infinite and virtually uncharted universe, the Earth suddenly takes on color, depth and perspective. It’s an emotional and inspirational image. So, this is our home, a blue planet with a biosphere that makes it exceptionally suitable for life, an assurance of well-being and growth.
But it’s a vulnerable home, with a biosphere that we are all responsible for, warns the Club of Rome almost immediately, in 1972. With that new perspective of our home, glowing warmly against the backdrop of the dark universe, comes the understanding that the conditions under which our habitat thrives are not self-evident and, in any case, temporary. Our planet is not inexhaustible, it’s clear from the start: there are limits to growth.

ANTHROPOCENE
Fast forward to 2020. We can now all zoom in from ‘space’, anywhere, anytime. The blue planet has become Google Earth™. But what we see is not always that inspiring anymore. Our home is not in order. Rather than instilling responsibility, Earthrise made us arrogant. Drunk from the view, we’ve brought down the Anthropocene upon ourselves. Blind to the consequences, we’re exhausting the planet, as if we are its last inhabitants.

Since that Christmas Eve in 1968, the world population has doubled and the number of people living in cities has tripled. And in the last thirty years we have emitted more CO2 than in all the previous centuries combined. The extractive fossil economy, which enables dizzying growth, places a huge burden on the land, on the Earth, and on the biosphere. And indeed, the planet is not inexhaustible. Climate and biodiversity are under threat, at least a million species will soon be extinct. We are the most dangerous poachers in the ecosystem on which we are completely dependent.

Exactly 50 years later, in the autumn of 2018, a second warning followed, this time from the United Nations Intergovernmental Panel on Climate Change. If we want to prevent a catastrophe, we have until 2030 to fully adapt the way we live on Earth. This lies at the heart of the UN’s 2030 Agenda for Sustainable Development, the need for change on a scale for which ‘there is no documented historical precedent.’
We’ve taken out an irresponsibly large mortgage on our home. It’s imperative that we realize that we’re facing the greatest crisis humanity has ever known. And that there is no time to lose. 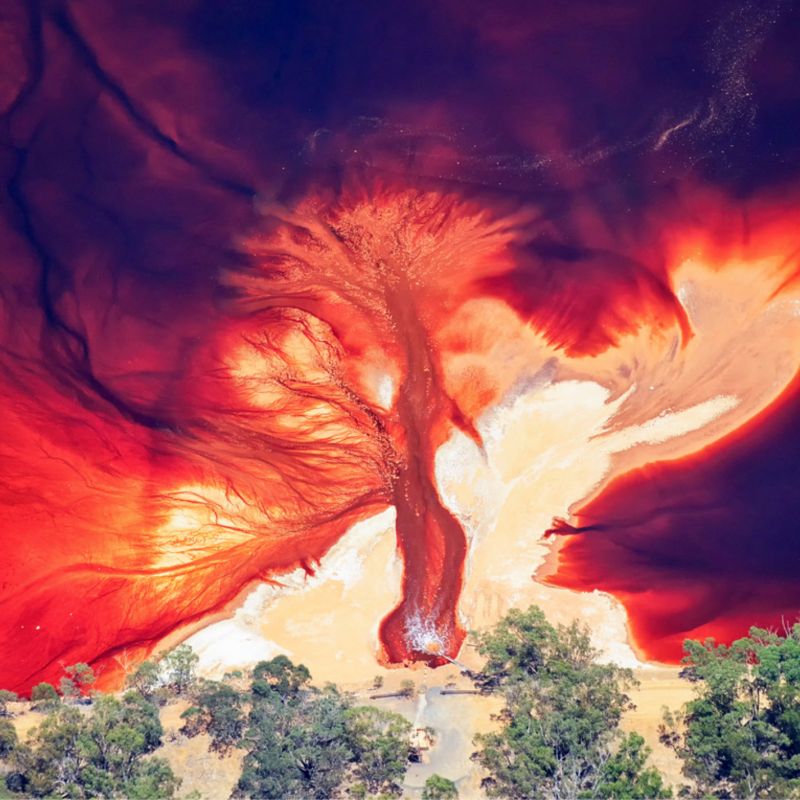 Tailing ponds, the byproducts of mining, contain toxic substances and heavy metals such as lead, copper and mercury.

THERE IS NO PLANET B
In 2020, the coronavirus has put the whole world on hold. This offers a truly unique opportunity to take a look behind the backdrop of the Anthropocene.
We’ve virtually ruined our relationship with the planet. Like the climate and biodiversity crises, but with a much more immediate effect, the pandemic is a result of human activity. Especially of our global economic and financial systems, with their emphasis on endless compound growth and the need to exploit nature to the fullest, in an increasingly violent maelstrom of people, money and goods, with no regard for the consequences. But there is no Planet B. Behind the backdrop, we realize, there is no behind the backdrop.
Covid-19 uncomfortably exposes how shockingly unequal and vulnerable we have become. We can no longer fool ourselves and cling to the idea that we function in an autonomous ecosystem, independent of the rest of the biosphere. It is simply not sustainable. Things have to change completely. The choice is now ours. But how are we supposed to proceed? Can we still pay off our mortgage? And how do we find a new way to live in our home, in time? 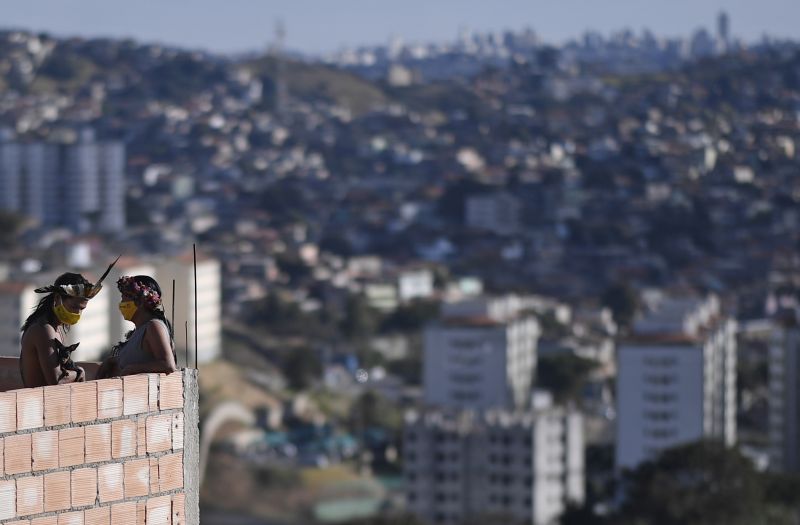 Wearing face masks and head-dresses, members of the Pataxo Ha-ha-hae tribe look out over the concrete jungle of the Vila Vitoria favela near Belo Horizonte, Brazil

Rewind back to 1968. Earthrise. Let's imagine coming from behind the moon and seeing the blue planet looming in front of us. The image is emotional and inspirational. Where can we land? Can we re-settle on Earth, as it were, in a sustainable balance with all other lifeforms? Can we, as philosopher Bruno Latour puts it, redesign our living environments ‘as that on which a terrestrial depends’ and always ask ourselves ‘what other terrestrials also depend on it?’
For this is now inevitably our new political mission, we have to redefine all of our actions as that which takes us back to earth. DOWN TO EARTH

LEVERS FOR CHANGE
DOWN TO EARTH endeavors to help find an answer to the question: Where can we land? Yes, the situation in which we find ourselves is scary. We have reached the point where it is all or nothing. Yet that’s precisely what sharpens our focus, puts us in survival mode. Forces us to think and act in a radically different but still concrete and solution-focused way, insisting on real world change, on research by design that wants to truly and sustainably ground.

The research by design carried out by the IABR–Ateliers focuses on water- and energy transition-related challenges. Highly topical subjects both in the Netherlands and around the globe. The Dutch Delta is drying out, all Dutch homes must become gas-free – these are some of the very concrete challenges that we’ve taken as our starting point.
We’re well aware that everything we do eventually has an impact on the entire biosphere, so our approach is an integral one. That’s the only way for us to contribute to comprehensive, truly transformative change. It’s why, in the Ateliers, we design solutions for the water and energy transition challenges in such a way that we also explore how those solutions can help us solve other problems at the same time. In other words, we use specific current challenges as levers for change, so that in fact we are always working on the much broader, structural and social transition that is at least as urgent.
What has to be done needs to be done in such a way that, at the same time, we do much more. And there’s no time to waste. So the question of how to do things differently, smarter and better has to be asked again and again and again, while we’re at it.