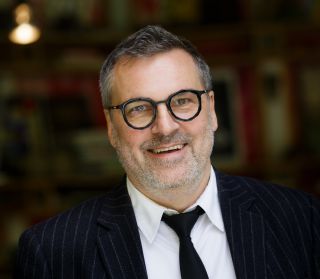 Leo van Broeck (1958) was appointed Flemish Government Architect by the government of Flanders in September 2016.
Van Broeck graduated as an engineer-architect from the University of Leuven (BE) in 1981, and has been a Professor of Architectural and Urban Design in Leuven since 2006. In 1997 he founded the non-profit organization Stad en Architectuur (City and Architecture), a foundation that promotes architecture in Belgium by means of debates, lectures and exhibitions. In 2007 he established architecture office Bogdan & Van Broeck together with Oana Bogdan. The office is primarily research-oriented and distinguishes itself by its active social engagement. In addition, Van Broeck was the chairman of the Royal Federation of Architecture Associations in Belgium (FAB) between 2013 and 2016.

As the Flemish Government Architect, Leo Van Broeck dedicates his mandate to the transition to full sustainability. He stresses the importance of making a more careful use of space in addressing the climate change challenge. His objective is the development of a building and design agenda aimed at a more comfortable, healthy, better-equipped and more inclusive environment, coupled with a more careful and sustainable treatment of that environment and its natural resources. Architecture and research by design can make an important contribution to that transition by imagining and testing both visions for the future and innovative solutions and by concretizing them in realizations. Leo Van Broeck aims to bring architectural quality, spatial quality and ecological quality together in one single narrative.
Read more