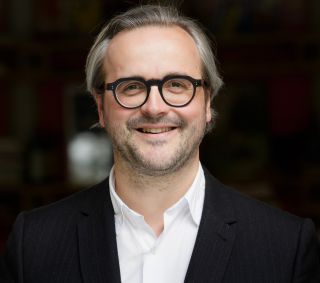 Joachim Declerck (1979) is an engineer-architect and founding partner of Architecture Workroom Brussels (AWB) – a European think-and-do tank for innovation in the field of architecture and urban and regional development. As a guest professor he has been associated with Ghent University (BE) since 2014. The main theme of his work is the use of design and spatial development as levers for the realization of social transitions.
After graduating from Ghent University Declerck attended the international postgraduate course at the Berlage Institute in Rotterdam. He remained associated with the Berlage from 2005 until 2010, and headed its professional research and development programme. He worked on the 3rd IABR: Power – Producing the Contemporary City (2007), that the Berlage Institute curated, and co-curated the exhibition ‘A Vision for Brussels – Imagining the Capital of Europe’ in 2007.
Since its inception in 2010, Architecture Workroom Brussels has been an initiator, a mediator and a platform to create space and conditions for innovative architecture and for research by design. AWB has a team of ten architect-researchers and is led by three partners: Roeland Dudal, Els Vervloesem and Joachim Declerck. The objectives of AWB’s long-term strategic work lines include visionary housing, productive landscapes, caring neighbourhoods and the productive city. As a platform for research by design and knowledge sharing, AWB contributes to broad public debate, to the professional practice and to knowledge development as well as to innovation in urban development and urban policy.

In 2010 Declerck was the curator of the exhibition ‘Building for Brussels - Architecture and Urban Transformation in Europe’ (2010). He was a member of the curator team of the 5th IABR: Making City (2012) and of the Belgian Pavilion at the 13th Architecture Biennale in Venice, entitled The Ambition of the Territory (2012). He was involved in several IABR–Ateliers as Lead Designer.